The 7th of November turned out to be a fine autumn day, far pleasanter than the immediately preceding wet Wednesday, which was better spent catching up with admin chores, giving the mid-week club ride a miss.  I decided to visit three more BCQ locations.

The British Cycle Quest is run by the CTC as a challenge for cycletourists.  There are six places to visit in each county in the UK, with a question to answer at each.  If you submit your answers on official forms you can win certificates, medals and trophies, if that turns you on.  Not me.  However, the checkpoints have been chosen to be in interesting places, in good cycling areas, so I have found them to be an inspiration for bike rides that take me to locations which I would probably not have visited otherwise but which turned out to be worth visiting.

Having already ‘collected’ just about all the checkpoints that can be reached in a day ride from home, I loaded the bike into the car and drove to Whitchurch in the Test Valley, only fifty minutes via M3, A303 and A34.

My first objective was Walbury Hill on the chalk ridge, so I set off through the lanes to St Mary Bourne.  Once Whitchurch and its noisy bypass were left behind, the peace of the countryside emphasised the lack of traffic and the smoothness of the road surfaces.

St Mary Bourne is a very pleasant village with a suitably imposing inn (The George) and church (of flint and stone and dating back at least 800 years).  It is a typical Hampshire village in other ways, containing a fair number of timber-framed cottages and of brick and flint cottages, a good few of them thatched.  I noticed that one timber-framed cottage had the framework filled in with alternating courses of brick and flint, a bit unusual but totally in keeping.  The village straddles its chalk stream, The Bourne Rivulet, and a B road, which was carrying very little traffic.

The latter took me three miles through stream-side pastures to the next village, Hurstbourne Tarrant, where I turned right on to the A343 for less than half a mile before forking left into another lane.  This time I was climbing, almost imperceptibly, a dry valley, through deciduous and mixed woodland where the valley was narrower, and spacious undulating arable fields where the valley broadened and had side branches.  Pheasants were everywhere.  The road started to tilt seriously upwards just before I reached Combe Manor, and at this point I realised that I had only encountered one other moving vehicle in the last five miles, and that was a road bike piloted by an attractive young blonde.

>From Combe it’s a short, steady low-gear climb to the top, where the BCQ-er has to avoid ‘falling off the edge’ as the road immediately plunges even more steeply down the scarp slope of the downs.  The immense rolling panorama to the north appears so rapidly during the last few yards of the ascent as to cause an intake of breath.  Vast acres of Berkshire, Wiltshire and Oxfordshire are spread out beneath you.  The next great chalk ridge, the one carrying the Ridgeway, can be seen a good few leagues distant.  Closer, a few miles away, the Kennet valley, where the next objective is to be found, is easily picked out.  For the present objective one must turn right for a side road and the Walbury Hill car park.  And there is the monument commemorating army rehearsals which took place on the lands at my feet in the weeks leading up to D-Day. 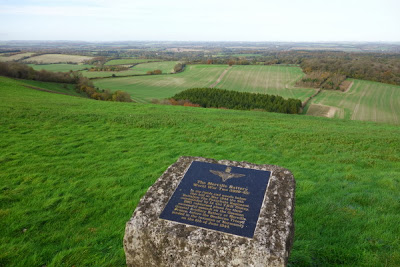 Details noted, it was down, down, down through Inkpen, down nearly all the way to Hungerford Common, an extensive, open, grassy area adorned with several avenues.  Grazing animals were contentedly lunching, for, yes, it was indeed lunch-time, but mine had to wait until I had answered the second question, cycling away from the eateries of Hungerford to the newest avenue, of copper beeches, planted to celebrate the Millenium, or ‘Minnellium’, as Victoria Wood called it in ‘Dinnerladies’. 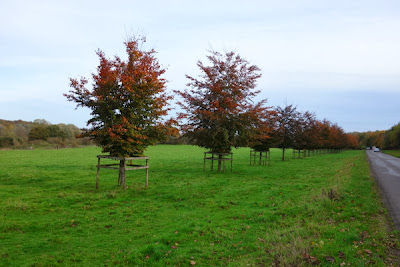 Whatever made me think of dinner?  I hastened to the canal bridge at the foot of Hungerford High Street, where the Tutti Pole Cafe is to be found and can be relied upon to serve good food at a reasonable price.  I have eaten there a few times over the years, and it is mentioned on quite a few cycling club websites.

Re-fuelled, I set off up the Kennet valley towards the third BCQ checkpoint in Ramsbury, taking the direct route as I was beginning to wonder whether I would get back to Whitchurch before sunset.  The B4192 to and through Chilton Foliat was undergoing re-surfacing, and had been planed, but, as you will know, this is not planing as a wood-worker would know it.  That made my fillings rattle a bit, but at least the road was not closed, which might have happened had my timing been different, according to a few yellow road signs scattered about the area.  Ramsbury, three miles further on, is another attractive village with a decidedly traditional feel to it.  I answered the question, took a few photos, and started my return journey. 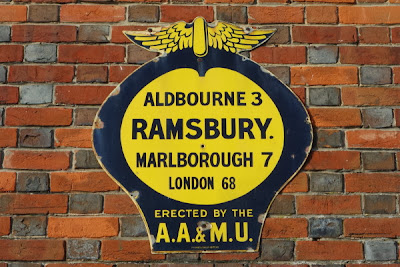 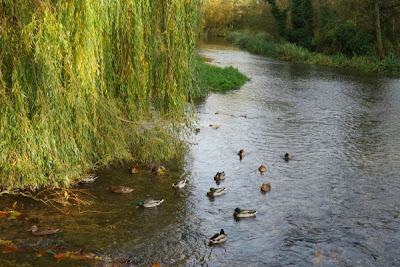 Cycle Route 20 to Froxfield starts up a 17% hill, which was manageable as the traffic had cleared a strip of tarmac amidst all the wet fallen leaves.  The descent to Froxfield gives good views of the Bath Road heading towards Savernake Forest and Marlborough.  It was a bit busy, but it is no longer a primary route since the M4 runs parallel.  It is in fact a very pleasant road to cycle along when the traffic is really light, e.g. before breakfast time on a summer morning.  Cycle Route 20 continued out of Froxfield up another ‘single-arrow’ hill, but not so steep nor so long as the previous one.

From Little Bedwyn to Great Bedwyn the route runs parallel to the Kennet and Avon canal.  A couple of miles further on can be found the Crofton Beam Engines, one of which is an 1812 original by Boulton and Watt.  They pump water from reliable local sources to the canal’s summit level a mile further west.  Where the canal goes, the railway follows, and so does cycle Route 20, but not I.  My direct route left the valley at Great Bedwyn to re-cross the chalk ridge to Oxenwood, and then down the valley through Vernham Dean and Upton back to Hurstbourne Tarrant. 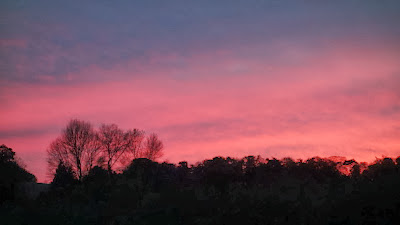 Sunset found me near St Mary Bourne, so the lamps and reflective stuff came out of the saddlebag for the last few miles.  The end of a memorable cycling day out.