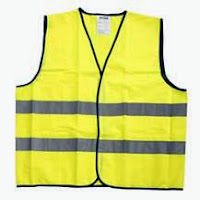 Scientific research has been done on this topic.  An important finding is that bright red and orange are the most conspicuous colours in daylight, but white is the most conspicuous at night.  DayGlo colours are even better in daylight because their fluorescent dyes convert ultra-violet to visible light, but they are no better than conventional dyes in the dark, when there is no UV around.  A good round-the-clock compromise is fluorescent yellow, which is why it is so readily available and so often used.

Reflective fabrics are brilliant at night but pointless in daylight except when visibility is poor enough to make the use of lamps desirable, i.e. when cars have headlamps on.  So, “high visibility” does not mean one simple thing, it could mean fluorescent, or reflective, or both. 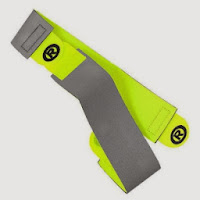 Likewise, vehicle lighting is never simple;  compromises are necessary.  Consider motor vehicle front lamps.  The compromise here is between being able to see where you are going and not dazzling other road users who are also trying to see where they are going.  Main beam headlamps dazzle, so cars must have dipped headlamps, which are subject to stringent regulation and tested annually at MOT time.  Front fog-lamps are, I think, less regulated, but it is illegal to use them when it is not foggy, i.e. when the visibility is greater than 100m, so that they do not dazzle.

It is similar for rear lights.  Typical filament bulbs are 5W for tail lamps and 25W for fog lamps, so once again it is illegal to use fog lamps when it is not foggy.

These laws are sensible, they work.  You can verify this for yourself when out and about on the roads.  In daylight in good visibility you see an approaching vehicle before you see its lights, unless it is using unnecessarily bright ones.  When it is foggy you see foglamps and dipped headlamps at greater range than the vehicle itself, but this is not true of the less powerful side-lights/parking lights, so their use in fog is pointless.

(I am coming to cycle lights soon;  hang on in there!)

Less sensible are the modern laws requiring new motor vehicles to have daytime running lights.  On some models they create more dazzle than dipped headlamps;  you can observe this for yourselves.  In my view lamps should be used only when necessary to see or to be seen.  You might think it does no harm to use them at other times, but I am against anything which might cause drivers to use their eyes and their brains less than they do.  One should not create an expectation, however slight, that road hazards will be lit.  That would shift responsibility away from where it truly lies.

Here is another example, from my personal experience, of this shift of responsibility.  I once helped a driver from her ditched car after she failed to negotiate a bend through excessive speed.  One thing she said was, “I was going less than the speed limit”.  Has the modern proliferation of speed limits created a generation of motorists who think that they need do nothing more than obey the rules to avoid blame when things go wrong?  Police drivers receive much training on “The Safe Use of Speed”, much, much more than learner drivers.

Cycle lamps are constrained far less than motor vehicle lamps, and some of the regulations are frankly illogical, so it is down to us to make rational choices about our equipment and its use.  We have to work out for ourselves how to see, be seen, and not dazzle.  I have had to stop my bike on the Basingstoke Canal towpath at night because I was completely dazzled by the headlamp of an oncoming cyclist.  His lamp may have been appropriate for a well-lit city street where it has to compete with tens of car headlamps, but not on the towpath, nor a country lane.  My headlamp is tilted down so that its beam centre hits the road roughly ten metres in front of me.  I can see far enough on an unlit road to be safe, including going downhill at, say, 20-25mph, and I know that I can be seen at a good distance because I can see reflective road signs way ahead.

Cycle rear lamps commonly used are good enough at night but ineffective in daylight or poor visibility – apply the “Which did I see first, the cyclist or his lamp?” test.  High intensity rear lamps that are bright enough to increase conspicuity in poor visibility cause dazzle in other circumstances.  If you want to use one, go to the back of the group.

I worry that if we all use lamps in daylight as a matter of routine, rather than as necessary, then eventually the motoring lobby will seek legislation making daytime lighting compulsory.  Don’t think it couldn’t happen.  The motoring lobby has a long, well-documented history of trying to shift blame on to accident victims.  Why else would my inbox contain a pile of emails entitled “E-Petition – Assumed Liability Road Traffic Law”?

I’ve rambled on quite long enough, and have advocated the thoughtful approach, so I leave you to draw your own conclusions!